Blessing in Disguise: Raj Shamani became one of the youngest entrepreneurs in India after facing financial crisis.

Financial crises either make you or break you. Raj Shamani, believed in himself, worked hard and earned this success. At the age of 16, his father suffered a diabetic attack and his business took a downward slope. Those days, the family couldn’t make ends meet. Even they faced hardships in paying the healthcare expenses. Like every teenager, he saw only one way to step up in the family business. 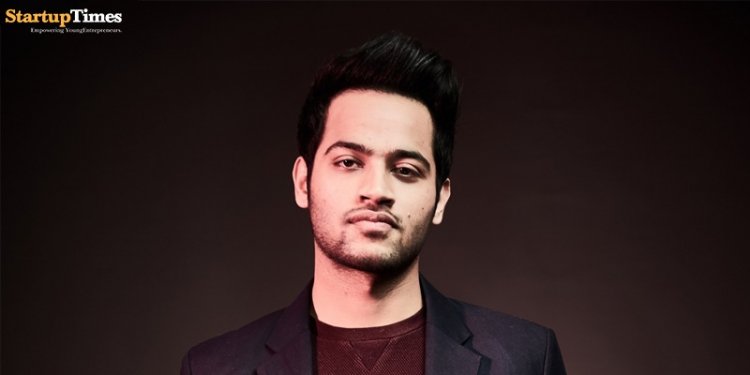 The path was full of thorns!

With God's grace, Raj Shamani is one of the youngest entrepreneurs in India having a turnover of Rs 200-crore. This journey began with making soaps at home in two buckets and selling door to door.

In the early 1980’s, Raj’s grandfather and uncle landed in Indore from Rajasthan in search of work. He still remembers the tough times his family faced, where the only financial source to run the house was his father selling coconut on the street.

With passing time Raj’s grandfather and uncle started working in a soap factory and his father used to sell them. Ultimately, the family decided to start their own business of soaps at home. They had enough contacts of dealers and source of raw materials required. The financial stability knocked their door with the launch of a dishwasher brand, Jadugar in 1990.

“My parents went through a lot of hardship but with the business growth the family situation improved. By 2003, we had our own house and my father started a chemical trading business as well, supplying to the soap manufacturers in the company”, Raj said in an interview.

In the 2008 recession, their business was badly affected. His father had a diabetic attack in 2013. Then, Raj had to shoulder the financial responsibility of the family.

“I was not inclined towards education and had problems speaking in public. Studying hard to get a job. I just had one choice to support my family financially. The only way I could do that was starting a business" he said.

Raj decided to step in the business of soap making. He borrowed Rs 10,000 from his father and brought new material for his business. “I watched many YouTube videos to understand the soap making process and implemented them. I took guidance from my father on how to make the foam and balance the ph level, among other things.” Raj stated.

Raj studied the market trends and understood that liquid-based soaps were an emerging category, with Vim and Pril the top brands in Indore. He made a liquid dish washer, the focal point of his business. “Vim and Pril were priced at 110 for 500ml. My product cost Rs 45 for the same quantity and I Didn’t compromise on quality” He briefed. Raj demonstrated his products in the family and groceries store in the nearby localities. Eventually he launched the product named Jadugar in 2013.

Raj never focused on profit margins. He targeted the local shop owners. He only earned a 12 % profit margin on the product. In July 2013, he sold 100 bottles to grocery stores and distributed 100 bottles among his friends. He observed how customers treat the free sample sachets. Either they throw it away or don’t use it. So, instead of providing sachets, he distributed 500 ml bottles. This increases the probability that the customer won’t throw it away. Moreover, they will use it as the quantity is large.

Later on, he received feedback from his friends and asked to connect him with their mothers. In this way he created a good network. He offered a 25% discount on the purchase of five litres. He convinced most of them and expanded his business with these earnings.

He collected data of women who wanted to earn money. He held a meeting with them and proposed to them to advertise his products in the market. In return, he promised to give 25% of sales each woman will make. He used the same strategy in 17 societies, which accelerated his business to new heights. A local newspaper shared his story of empowering women. The sales in local stores also multiplied at a decent pace.

Raj represented India at the Youth Representative Programme at the United Nations in 2015. He started giving public talks at global level in institutions like Jaguar Land Rover, TCS Global, Reliance Industries and Forbes in 26 countries. He also spoke at the TEDx conference.

He merged his father’s chemical trading company with his own business. In FY 20, Shamani Industries as a whole marked a turnover of Rs 200 crore. The portfolio of the company expanded to 16 products. He achieved a strong customer base in Indore and nearby places. He made deals with Tata, Nirma, Aditya Birla Group and other companies for raw materials in bulk.

“Brands come in like seasons for a year or two and try to flood the market with offers because they have deep pockets. Most MNCs think FMCG is the way forward in the wake of the COVID-19 induced lockdown, as homecare products were included on the essential list. But I don’t think that’s the way ahead for everyone.” he explained. It disturbs the market health.

He has a different outlook towards the competition. He proudly said, “I cannot be a Unilever of India, but I can be a Unilever of my city or my area. I don’t want to miss this chance. I believe in first getting my brand a strong foothold in the local and nearby rural and semi-rural areas.

He learnt in the pandemic that a business should have strong grip wherever it is present. He targets to expand his business to 500 km soon i.e., Rajasthan, Gujarat and Uttar Pradesh. The company is thinking about increasing the number of products. He aims to invest in early stage FMCG start-ups and step up the game for household brands.

The first step of business was taken for financial independence but today it became much more than that, Raj said.

Indian new companies pull in $10.14 bn in subsidizing in