Hey! Rapacious reader. Want to know about the person who created ‘Noval Antiviral and Anti Microbial Solution’. Here it is- MR. HARSH LAL

Mr. Harsh Lal is the originator and CEO of MEDICFIBERS, a leading company in healthcare and medical equipments. He is an alumni of IIT Delhi and have achieved the academic minor degree in Textile and Fiber engineering. 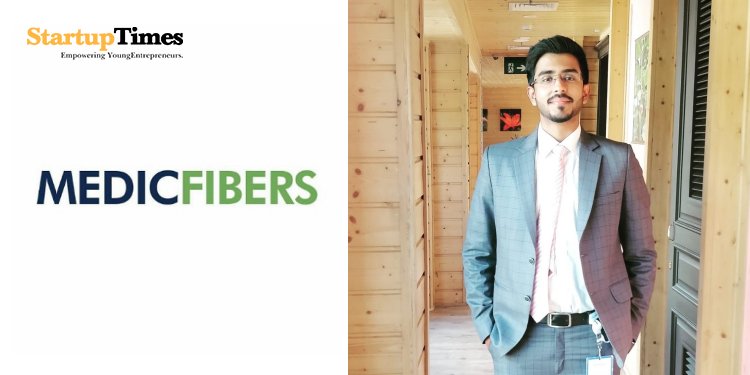 “The greatest wealth is health”

Mr. Harsh Lal is the originator and CEO of MEDICFIBERS, a leading company in healthcare and medical equipments. He is an alumni of IIT Delhi and have achieved the academic minor degree in Textile and Fiber engineering.  Being passionate and concerned about the welfare of the society, he has burnt the midnight oil, thus, giving a thought to commence a project of breathable and sterilized medical products.

He was born and brought up in Patna, the Capital of Bihar. After accomplishing his schooling from there, he advanced to Delhi for Graduation. His parental foundation is laid in business, eventually, being motivated and inspired from them, Mr. Harsh has always contemplated for a novel profession. Visualizing today’s scenario wherein the entire world is struggling to combat with Covid-19 and its variants, he along with his unit members gave a thought to establish a business of health maintenance and in due course named it ‘MEDICFIBERS’. With persistent perseverance and devoted dedication, he is working tirelessly to make his dream come true.

Since 2017, Mr. Harsh has been working on projects relevant to wellness and health conservation. Thus, he was always in contact with experienced doctors and health workers. On the basis of immense discussions happening every other day, he became aware of the diseases and infections being spread amongst the humans either through bacteria or communicable pathogens which can create major problems. In 2019, there existed a challenge to control the transmission of Corona Virus which was exceedingly communicable. Amidst such outbreaks of lethal and pernicious pathogens, our frontline workers need the most effective antiviral and antimicrobial medical commodities to brawl against the infections being passed on. Unfortunately, Mr. Harsh was lack of funds and was in a dilemma how to begin with the concept. Gradually and dedicatedly, he pitched some competitions and also received some governments grants which was a bliss of God that filled his bank accounts. Henceforth, after qualitative research and quantitative testing of 3-4 years, he along with his team invented an antiviral textile solution

‘VIROCLOG’ which could save our frontline workers from being infected by virus or bacteria. His principal objective is to rescue human lives by shielding the fabrics and fibers with a layer of safety because “health is priority’. To talk about ‘VIROCLOG’ , the innovative creation by ‘MEDICFIBERS’, it is the only antiviral chemical solution that could stay up to 125 washes. The medical products manufactured are fully guaranteed as they are certified from reputed organizations and testing labs in India which makes them reliable.

To climb the ladder of success one has to cross the stumbling block. Hurdles and obstacles make a person competent. There arrived a moment when Mr. Harsh was once again short of funds, eventually was unable to pay remuneration and office rent. Fortunately, the team which he has fabricated with love and affection stood by his side in times of need as they all pivoted around the well being of the human race and not around banknotes.

Mr. Harsh is highly concerned about the safety and security of the doctors and his workforce who risk their lives in this present situation of prevalent virus. His thought specifies “to save other, first save yourself”. As a consequence, with sheer zeal and enthusiasm, he has developed this unique product which will give long lasting protection from bacteria and virus.

‘MEDICFIBERS’ is a registered company since August 2019 and the product was commercialized in 2021. Since then, the firm has accelerated its economic value to approx. 30 crores. His products are being used in more than 150 hospitals/ clinics/ dispensaries across India. Although, he has floated his first product in the domain of medical consumables, in near future, he is planning to swell his products to the medical equipments sector as well. He aspires to make his company the prime and foremost agency which will provide solutions to the health related issues in the country and abroad.

5. DESIGNING, PROTYPING AND MANUFACTURING OF THE FIRST PRODUCT:

Hit and Trial method is the basis of invention. After intense research, physical efforts and continuous testings his first product came into being.  The product was created after exploring its functionality, sustainability and durability. The designing process included several efforts of exploration and investigation in various research papers- International or National. Many hypothesis were laid, experiments were conducted to inspect the compatibility of chemicals with threads. The trials and examination included wallets every time which created complication situations sometimes. All kinds of compounds and mixtures were tested on fabrics for action and reaction. The tedious job was to establish the concept and build a physical prototype and look into areas to improvise and further development. Once the preliminary formula was derived, and then came the process of chemical testing. The solution’s viability was investigated with different kinds of pathogens viz. virus, bacteria and protozoa. Multiple test methods were inoculated and trials were done to assess the reliability of the solution. Once the effectiveness of the solution was ensured, and then came the process of mass manufacturing which included mandatory changes for the proven product design and providing specifications. With Almighty’s blessings and sheer hard work, at last Mr. Harsh was able to touch the sky with positive and contented result. Henceforth, the solution was inferred which was antiviral and antimicrobial in nature. Now the time came when the fabric has to be tested for its efficacy. Several investigations were conducted to ensure the number of washes a fabric can suffice.  Each time the experiment conducted was cost efficient, though sometimes the tools to be used were unavailable in the country. At times, these investigations demanded customization, which has to be in relevance with industry standards. Ultimately, the product was finalized and now conversation with manufacturers had to be conducted in order to discuss cost efficiency, support and guarantee.

As a result of dedication, perseverance and enthusiasm, the first medical product of Mr. Harsh Lal i.e. ‘Anti Viral and Anti Microbial MASK’ was launched and over 20,000 in number were distributed all over India. The product received positive and overwhelming response from all the four directions. The product was indeed eco-friendly and sustainable.

This firm is the one stop destination for startups looking for investment.

Reliance jumped into acquisition when Indian startups were struggling...