KPOP Foods’ mission has always been to bring people together through the sharing of Korean food and flavors. We want to educate people, but in a fun and delicious manner. 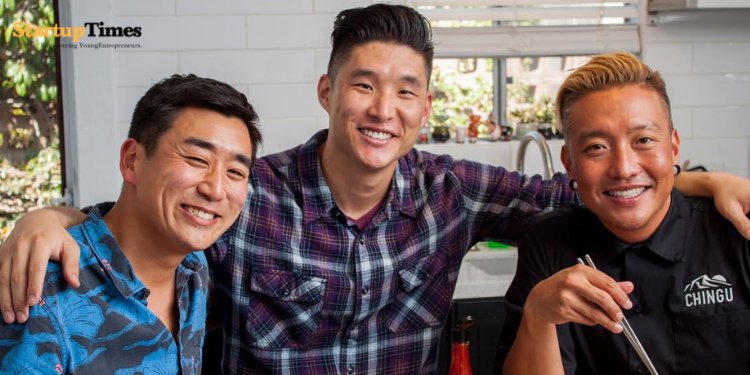 KPOP Foods cofounders Mike Kim and Theo Lee’s secret sauce for entrepreneurship? Theo’s 80-year-old family recipe, Mike’s military background, and a shared belief in the power of food to bring people together. After graduating from West Point, Mike was commissioned as an infantry officer in the US Army and served for five years. After a combat deployment to Afghanistan and stints at bases in New York, Georgia, Washington and Arizona, Mike’s last duty station was in South Korea. “As a Korean-American, born and raised here in LA, it was an awesome, crazy experience working in Korea,” remembers Mike. “Creating that bond with the people and the culture, did kind of really inspire me, not just about food but to really do something close to my roots.”

After transitioning from the military in 2015, Mike attended UCLA Anderson Business School, where he quickly befriended former investment banker Theo Lee. The idea for KPOP Foods fell into their lap—almost literally—while brainstorming thesis ideas at a favorite Korean barbecue restaurant. “We were with a group of our classmates, many of whom had never tried Korean food before,” said Mike. “They loved it so much that the next day they asked when we could all go back. I realized that we had to do something with Korean flavors." Theo recalled that his undergrad fraternity brothers clambered for the homemade gochujang red chili paste sauce his grandmother sent to his dorm. Why not start with that? The recent spotlight of Korean cuisine by chefs such as Roy Choi, David Chang, and Anthony Bourdain, combined with the ability of social media to serve as a gateway to new tastes and experiences, made it seem like the perfect time to launch a startup focused on making Korean flavors accessible to a growing audience. “We knew that food brings people together in a way that they can share and smile,” said Mike. “So KPOP Foods’ mission has always been to bring people together through the sharing of Korean food and flavors. We want to educate people, but in a fun and delicious manner.”