Meet Yatharth, the founder of Rostrum who left his job in London to start his education consultancy platform in India.

Yatharth was born and raised in New Delhi, where he did his schooling until 2013. After that, he moved to London for higher education. During 2013-2016, Yatharth studied at London while working at PwC, PricewaterhouseCoopers is a multinational professional services network of firms, operating as partnerships under the PwC brand. PwC ranks as the second-largest professional services network in the world and is considered one of the Big Four accounting firms, along with Deloitte, EY and KPMG. 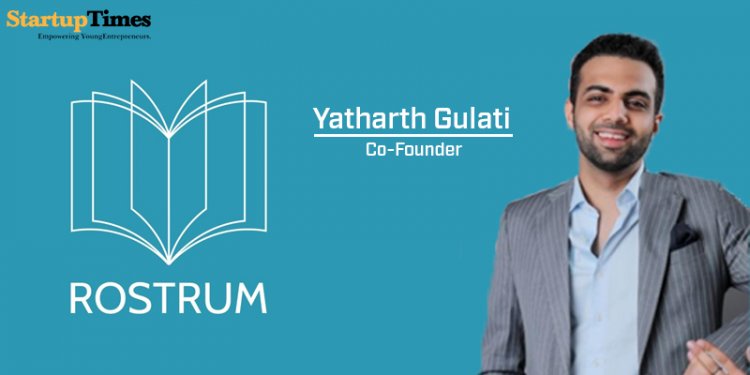 He left his job at London in 2017 and moved back to India without a plan for his future. Back in London, Yatharth had started working with prospective students looking for admissions in the world's top universities. He continued this work after returning to India, albeit on a much larger scale, and that is how Rostrum came into being.

Since 2017, Rostrum has helped hundreds of students to reach some of the most prestigious universities in the world. The company recently set up an office in Dubai and has come a long way since its inception.

"In 2017, just two of us, my partner and I, had started this business. It has been three years, and the journey was incredible," says Yatharth.

Rostrum connects people to college tutors as well as counsellors. Rostrum includes former education officers from universities in the US and UK. Many of these experts are based abroad and support students from India with various aspects of college applications. Rostrum envisions guiding students in what they want to study and not just where they want to study. A diverse team of counsellors and tutors at Rostrum helps the students in deciding on a career. They also make it possible for them to get into the right college to achieve their goals. Academic support, profile building, and test preparation (for exams like GRE, GMAT, SAT, and ACT) are some of the key services provided by Rostrum. The company is unique because it integrates school education (through tutoring) with profile building and test preparation for college admissions.

We asked Yatharth about how he thought of launching Rostrum.

"When I was in London, along with my work at PWC, I also used to tutor the children around my area. I used to do it part-time, so, apart from making money, I saw the potential in it. That's where I came up with this thought that why not start education counselling to help the students and connect the tutors and mentors," he said.

He further added that "earlier we started with just tutoring, but later we expanded ourselves in counselling as well. If you talk about CBSE and ICSE then there are thousands of companies doing the same thing. It's not very easy to compete with them. So, we found a niche in international schools. At the time when we started, there was no structure for it. Several tutors were doing it here and there, but no company was doing it with a proper structure. We found an opportunity, and we started doing that."

When asked about his inspiration, Yatharth names Warren Buffett. He praised the billionaire businessman's acumen for investing smartly and is impressed by his far-sightedness. The young entrepreneur says that Warren Buffet has taught him to aim higher and understand the long-term game.

"My inspiration has always been giving the right decision or advice to our students. If someone is like - 'I wanna go to Harvard, and I will pay anything'… but if that is not possible, we would never say yes to a student just for the money. We feel that once we take money from a student, it's our responsibility to provide them with the right guidance," explains Yatharth.

The biggest challenge that Rostrum faced was making people understand the difference between them and the other companies. Rostrum provides all-encompassing support for college applications rather than working like an admission agent. The fact that Rostrum has not tied up or collaborated with any foreign university is proof of its unwavering commitment to its students. The company prides itself in working solely for its clients. It does not work for universities that pay the consultancy companies for bringing in students.

Yatharth believes that their reputation is based on brutal honesty, which also translates into better results for the students.

"People may not like us in the first place because we don't give them false hope. If the deal is impossible, we don't accept their money and say no to them. This is good for both of us; it saves a client's future and money and also helps us maintain our hard-earned integrity and reputation," says Yatharth.

A word of advice.

When asked about one piece of advice for our readers, this is what Yatharth said, "If I have to give one piece of advice, I will say just get started if you have an idea because this is the one mistake I have made in my past. I would think about something and take 6-7 months to finally start it because I wanted to do things perfectly. But, that was a mistake."

This is the reason why La Opala was able to establish itself.

This Indian Deep Tech Founder is building the seedbed for a better world...

Virohan, the healthcare startup, raises $3 million in series A funding.