A pursuit for healthy and pure cow’s milk led Kanika Yadav and Sanjeev Yadav to be dairy farmers and start ﻿﻿﻿Whyte Farms, a dairy startup on the outskirts of Alwar, churning revenue in crores at present. 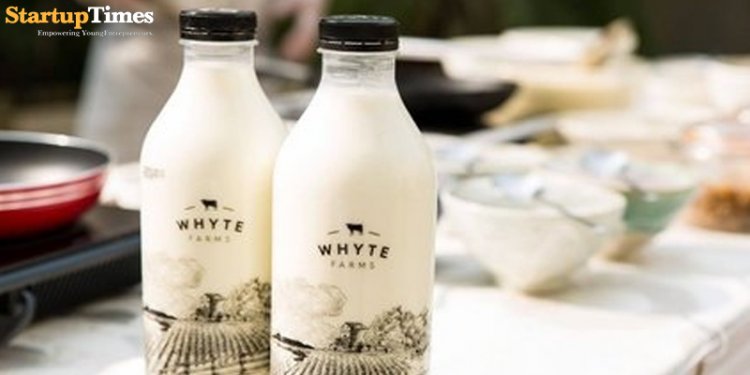 The Delhi-based startup sells unadulterated milk with the manifesto that reads no use of preservatives or adulterants, organic insecticide-free fodder, no use of antibiotics or hormonal steroids and most important of all, a good life for the cows.

What led to the idea of Whyte Farms?

The Delhi-based entrepreneur grew up drinking pure cow’s milk from the cattle at home till she was 28 years old.

“The quality of milk in Delhi is bad, despite India being the largest producer of milk in the world. The packaged milk is not fresh. With the local doodhwala, we were concerned about hygiene and what the cattle were fed,” Kanika said.

Studies have discovered that over 68% of milk and milk-related products in India do not conform to the standards laid down by food regulators. Even more alarming, it was found to be adulterated with substances harmful for our health, such as detergent, caustic soda, glucose, refined oil and even white paint. Kanika added that the quality is further compromised by the long processes that take at least four days before the packaged milk reaches a consumer’s house.

The inability to find the kind of milk she had been drinking for 28 years drove her to start Whyte Farms in 2015, along with co-founder Sanjeev Yadav.

Whyte Farms claims to be the healthier alternative, with all the procedures from chilling, pasteurising, and packaging taking place at its 30-acre farm in Tijara, home to 500 Dutch Holstein Friesian cows.

Packaged in glass bottles, the milk is supplied to more than 3,000 households within 8 to 12 hours of the cows being milked, without the service of any external agency.

To ensure cattle are healthy, the founder-duo sourced 200 calves and raised them at the farm where fodder was also grown. The farm also has a massage station for the cattle.

At Whyte Farms the milking and packaging processes are entirely automated, hence completely hygienic. They are certified by International Organization for Standardization (ISO) and also licensed by the Food Safety and Standards Authority of India (FSSAI).

“We do not use oxytocin or any other hormonal injections to produce more milk. We are sternly against such artificial practices. Every cow is monitored and regularly checked for health. This ensures that a cow that has not performed well on health parameters is not milked, thereby ensuring harmless and nutritious milk,” Kanika says.

With little agricultural know-how, setting up the farm and taking responsibility for the cattle has been quite a task for the entrepreneurs, even with a professional veterinarian onboard. They studied animal husbandry, the cycles, and how to rear certain breeds.

Another challenge they encountered was the initial lack of acceptance from customers. They were loyal to big milk brands and trusted them. “Though I would educate them about the preservatives in big brands and the processes involved, people were sceptical to switch,” she says.

Whyte Farms started with 50 cows in 2016, catering to a small demographic, and today has 500 cows.

Bootstrapped so far, the Delhi startup devoted a year to research and setting up the farm before starting delivery in January 2017. Having imparted an initial investment of approximately ₹4 crores, it clocks an annual revenue of nearly ₹7 crores.

It has grown slowly, expanding the team and partnering with brands like Blue Tokai. Slowly, but steadily, it is driving towards its aim to make a difference in Indian households, one bottle of milk at a time.

Priced at ₹75 per litre, the startup caters only to the Delhi-NCR region at present and hopes to provide the service to households in Noida as well.

In the coming months, the startup hopes to expand to more cities and supply products like paneer (fresh cottage cheese), curd and reduced-fat variants as well.

“We have all that it takes to grow goodness. We are a self-sufficient, sustainable, high tech organic farm because we believe in growing food the way it ought to be grown, naturally and whole-heartedly,” says Kanika Yadav.

Lantern is a startup looking to ignite a conversation about how to die...

Namita Thapar - The Founder of Incredible Ventures Ltd and CEO of Emcure...