Taufeeq Ahmad and Muskan Rastogi are the founders of Skolar.in. Taufeeq has graduated from a college in Bangalore in 2019. He is already doing a job in an e-learning company. 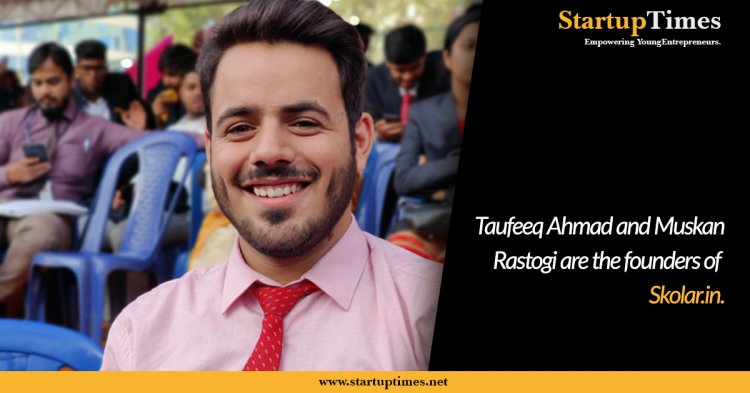 Muskan, the co-founder of Skolar.in, had this idea of starting a YouTube channel for competitive exams. After the pandemic, Muskan finally discussed her idea to do something new and start a YouTube channel with Toufeeq.
Initially, they both tried making videos regarding competitive exams but there were already a lot of companies doing that.
After some research eventually, Toufeeq finalized the plan of creating an e-learning website and this is how Skolar.in came into existence.
They focus mainly on the training for campus placement as well as other competitive interviews open for everyone.
So the main idea was to come up with an e-learning website where they can train the students who are planning to appear in the campus placement.
Taufeeq says he himself has faced this problem that even if you are good at coding, you face problems when in the initial stage of placement rounds they ask reasoning and the other qualifying skills for the College placements.
This led Taufeeq and Muskan to think that why not teach students about interviews and HR rounds, basically the first round of placements.
They also came up with the idea to teach the students for the second round of placements.
The co-founder Muskan has experience in teaching and is very good at maths, which came to a great rescue for Skolar.in.
For the first couple of months, Taufeeq focused entirely on the work on the website and coding.
While Muskan was working on the content and product marketing.
Initially, they started their courses worth 4000 to 5000 rupees but later they found out that they needed some trainer or expertise or people who were already experienced in this field so they kept those expensive courses on hold and came up with the idea of providing a test series to the trainees.
The test series is basically a kind of crash course but not exactly like the crash courses that happen in classes.
At Skolar.in they give questions to solve and later they provide a proper analysis with the answers. That is what they have been doing until now.
Skolar.in is a completely online platform but they are focusing on making it offline which is not happening right now due to the pandemic but as soon as the pandemic is over and they move back to Bangalore, they would focus on the offline mode.
Skolar.in is a website plus they have a YouTube channel as well.
Now talking about the challenges, Toufeeq says that their journey started between the pandemic and the biggest problem that he faced was communication.
Communication between Taufeeq and the other people working for the company was the major challenge that they faced.
"Also, I had to handle the job I have already been doing, so overall it was a hectic experience", says Taufeeq.
The company at which Taufeeq was already working is also an e-learning company. According to Taufeeq, the experience there came positive to Skolar.in.
"I am not new to the world of Business Development and e-learning, my co-founder is experienced in teaching and good with arithmetic and math, also, some of my friends, already own a startup and are always ready to advise so the major things that could be a challenge, were not challenging to me", said the founder of Skolar.in.
Another thing that benefitted them was that they decided to start sales at the initial stage.
To start the sales they needed a proper team, good with Marketing and digital marketing skills.
Taufeeq says, my brother, who is good in sales helped a lot with the sales of my website.
Because of this Taufeeq advises that if you have a good network then you can start a business, hassle-free but if you don't have a good market and it could be a problem in the initial stage.
Right now the team at Skolar.in is focusing mainly on figuring out the sales and the proper strategy to work.
Taufeeq says, "the next goal for six months is to build our product and sales, if we have good sales than the investors would be happy to spend in our company and website."

Breakthrough in Early Detection and Diagnosis of Cancer with a Simple...