From walking 1.5kms daily for going to school to CEO of Greenbuds

Starting your own business is tough, even at the best of times. But, what about launching a startup during a global pandemic? You’d have to be mad, right? After all, figures from the Office for National Statistics show that a quarter of branded companies have temporarily closed during the lockdown and the majority of those still operating have reported lower turnover. However, some people started swimming against the waves and now even the waves are favoring them. 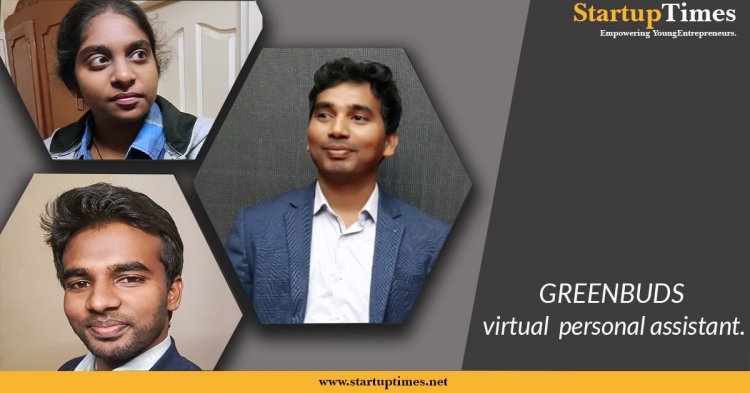 We started our new vertical “Virtual Personal Assistant for Rent” but didn’t knew how COVID-19 would affect it but the coin fall on our side and it proved to be helpful for our startup. Most of the startup companies were facing and sailing with financial problems. We offered them our virtual assistants and they were thankful for this.

Deepak kumar CEO of Greenbuds Virtual personal assistant which, provides virtual personal assistants for your startups and companies. There are people who want to start a business but don't have office space and money for paying salaries. Deepak and the core team Creative Designer Sowmiya, Captivating Client Coordinator Ranjith wanted to help them. Therefore, they came up with the idea of Greebuds Virtual Personal Assistant where Managers, businesspersons, and women entrepreneurs can hire their virtual assistants and have to pay for the work done.

Deepak was born in a small village of Tamil Nadu. It used to take walk of around 1.5kms and two buses to reach his school from his village.  In his 10th standard, he decided to become a director. After completing his school, he joined Sri Venkateshwara College of Engineering (SVCET) in Chennai. He packed his bags and left to Chennai, not for graduating as an Engineer but for becoming a "Director". To make his dream come true he began to search for some local channels in his third year but he didn’t got selected. He tried his luck very hard until his last semesters but never got lucky.

How the Journey Started and the problems that were faced

After completing his college, he joined a research company called BoardEx. It was a night shift job. His whole world was turned upside-down as he used to spend his daytime sleeping. He continued his job for one and a half years and finally left his job. Once again, his urge of becoming a director started to show up.  He didn’t had any money with him so with his friend’s (Bharath) help, he bought a pen and paper and started to write scripts.

Deepak says, “Change is the only thing that is permanent in this world”.  And there was a sudden change in his plans when his friend got a government job. He left Chennai leaving behind his dream of becoming a director to clear government exams. Unfortunately, he didn't clear any exams and unexpectedly met a friend who suggested him of starting an Export business.

Finally, his conscience decided that he was fit neither for making a movie nor for a government job. He discussed the idea with his friend and named their business concern as Greenbuds Coco. They began to incorporate their experience gained in the research company to search for the clients and to their surprise; they got a reply from a client for a quotation. Everything was going well. However, another dip hole in his life came; an astrologer said, "Deepak cannot run his own company because of the positions of the planets in the horoscope. And he is supposed to go for a monthly paid job or else he would lose all his money by doing the business.” and his family started to advise him to leave the business and join a monthly paid or government job.

Again, he carried the same bag and returned to Chennai. After working in two companies and getting a very little salary, he got an offer in a Digital Marketing Company named Mouse back but was stuck with the same night shift again. After joining here, within a year, he got a central government job as a Postal Assistant in Ooty. Who will say "no" for Central government job and that too in Ooty? He joined and started working, but after a week he left Ooty without any prior permission from the government office, came to Chennai, and joined Mouse back again.

Even after joining the company, he used to check the mails of Greenbuds Coco. His colleague who was sitting beside him saw his mails and asked, "Are you doing exports?” and asked, "Can we do together?". He thought that life is again giving him an opportunity and agreed. One more colleague from the same office joined them and the three registered their company as Greenbuds Exports and Imports.

They earned and lost the money simultaneously, and were in debt of 18lakhs in a year. The debt amount was multiplying, seeing this they left Greenbuds Exports and Imports. Even though they lost finances, they learned sales and business.  Experience of working in a Digital marketing agency and sales experience in this Greenbuds, urged him to do Digital marketing sales. Wherever he used to see a restaurant and digital-related business office, he used to approach them directly. All of a sudden, he got an export order from existing clients and within 3 months of time, he settled almost 70% of the debt. His focus was, to clear all debt and start fresh again for stepping into the same business path, and with his small yet strong team, they thought of expanding their business. And all this led to the formation of Greenbuds Virtual Personal Assistant.

In only a month, they earned 40k and the aim is of 50milliion dollars. And with their hard work will surely achieve this. Their only motto is “Don’t quit your Job for becoming an Entrepreneur”, Hire our Virtual Assistants and pay how much ever you can.