StayApart- helping to discover India and making their stay memorable

Many of the tourists have already started travelling to select destinations while others are waiting for the end of the ongoing pandemic to start trips once again. Considering the current scenario, people prefer not to choose popular destinations. 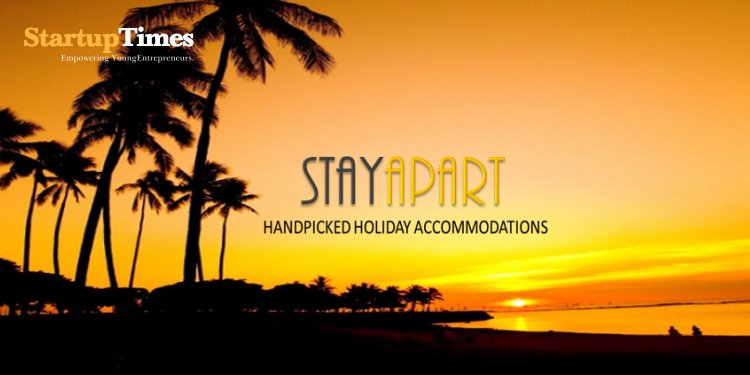 They plan for places that are less popular or not explored by many people yet. Although, choosing a destination is easy but finding good accommodation is very difficult, sometimes one is forced to compromise his comfort. StayApart here comes to aid and provides hand-picked accommodation to their clients. These locations are in some incredible locales for those longing to StayApart from the city and spend a memorable time in the lap of Mother Nature and experience the local culture.

Dinesh Chugh, the founder, and CEO of ‘StayApart’ is from Chandigarh. After his graduation, he started his career in the IT sector and later moved to tourism. While he was in the hotel and tourism industry, he worked in international hotel chains such as Golden Tulip, Best Western and Swiss International. There he recognized his passion for this industry and the potential of tourism, since he was into it he decided to not to leave it soon. He wasn’t satisfied with working under these larger chains  but wanted to start something on his own. Hence, he started StayApart with a unique concept of connecting tourists with their roots in the lap of mother nature.

StayApart is all about connecting unexplored places to mainstream tourism through technology. This bold step has helped in generating employment in rural areas in two ways. Firstly, the guesthouses and resorts which were once non-crowded places now have more clients. Due to exposure and globalization, tourists have recognized the newer destinations with improved the economy of such places. Secondly, the rural areas have a boost in employment since now people are visiting the place. People no longer move from their hometowns to remote places and contribute to rectifying it. The company has tie-ups with big names in tourism such as Booking.com, MakeMyTrip, Agoda, AirBnb etc which has abundant clientele but resorts that get overbooked often. This multi-channel platform then connects them to the smaller resorts, hotels, and guest houses that need clients.

The tourism industry is almost rocketing in India, with a total contribution of over 247 billion U.S. dollars to the country’s GDP and estimated to double in the coming years. Although other parts of the economy sank in recent years, the tourism industry had grown as an important source of foreign exchange for the country. And for the people on the ground, it has been creating jobs, both directly and indirectly. Moreover, 7% of total world exports and about 30% of world trade in services are gained through tourism.

After analyzing the concept of sustainable development and the changes in the contemporary environment, StayApart noticed a unique trend in this sector. That the most interesting destinations for modern tourists are offbeat or remote rural tourism destinations with untouched nature and specific anthropomorphic values.

As per experts, tourism can play an important role in preserving and promoting rural destinations and fostering rural development. Starting from this assumption, the basic aim of such StayApart is to underline the necessity of a new concept of rural tourism implementation to ensure sustainable development.

When Prime Minister Narendra Modi started supporting local, Dinesh was determined to start his venture and founded StayApart in November 2017. It was established with a motive to resolve the problem of accommodation for travelers in small cities, towns, and villages in India. Owners of smaller guest houses, hotels, and properties in areas away from mainstream places devoid of resources to connect with more tourists, StayApart helps them with the technology and connectivity part. This concept was eventually praised by all and that made it secure its first investor just within a year of registering. This first investor was Sumit Kumar, who invested Rs.26 lakhs in StayApart. The investment scaled up the marketing of the firm which eventually led the company to gain more customers. The gross business of StayApart was Rs.1.5cr and Rs.3cr in the year 2018 and 2019 respectively.

The company is helping people to fulfill their desires by traveling to the best destinations. Earlier when SatyApart was started in 2017, there were no competitors as such. Being a new concept, no one ever thought of starting such a platform but now there are a few similar to them. Hence they were the trendsetters by starting such a platform, no one can beat them till now.

There is a team of seven highly skilled people in the company currently. They are working remotely due to the ongoing covid-19 restrictions, while their head office is in Gurugram.

While in 2020, the current tourism industry has been affected due to the previous country-wide pandemic and travel restrictions. The lockdown has brought the entire tourism industry to a standstill and it will take longer to recover. But this condition hardly affected stable companies such StayApart, as the platform has recently added 50 new properties. They have a successful partnership with more than 150 Hotels, Resorts, and Homestays across 100 locations in small towns and villages in India.

He had an aim to expand the tourism industry at a micro level, with rural unexplored areas. There are many beautiful spots different from mainstream places that could be explored. Many people who have guest houses, hotels, and properties in areas away from main places do not have resources to connect with more tourists, StayApart is revolutionizing them with modern technology and resources. They have planned to broaden their company over faraway areas so that more people can get benefitted from it.