The Corona virus made it almost for conducting Durga puja this year. But this did not allowed the enthusiasm of devotees to drop as people came up with an idea of virtual pandal startup in Kolkata. 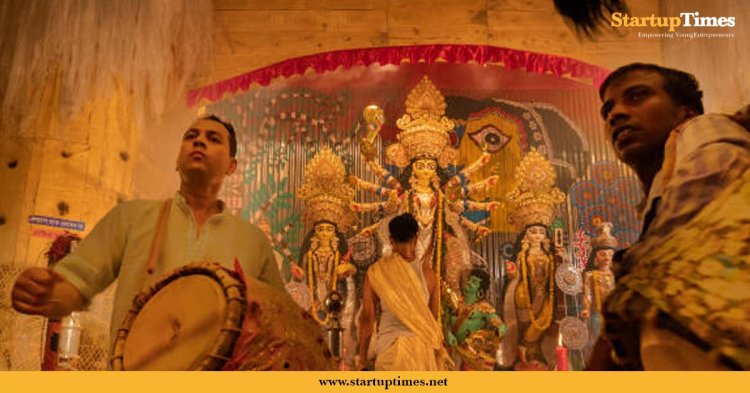 Also known with the names Bhavani, Amba, Chandika, Gauri, Parvati, Mahishasuramardini, Durga is the ‘Mother goddess’ and the ‘Protector of the Righteous’ to Hindu devotees. Therefore, Durga Puja is the yearly festival of this Hindu Goddess Durga. It is one of the Grandest celebrations in West Bengal. It is a multi-day festivity fluctuating from 6 days in certain places of the nation to 10 days in others. In a large portion of Northern India, the celebration is commended as Navratri (nine evenings). Despite these varieties, the most recent four days of Maha Saptami, Maha Ashtami, Maha Navami, and Vijay Dashami are especially significant and likewise celebrated with many wonders around the nation.

Consistently every year lakhs of enthusiasts assemble in Kolkata to observe Durga Puja. People hop from one pandal to another to witness idols and art that are on display. The devotees enjoy the night-long pandal-hopping. Almost the whole of Kolkata is decorated on this auspicious occasion. The celebration is commended with routine, fasting followed by feasts, expound embellishments, and pujas.

But the year 2020 is completely a different story. With Corona overshadowing the lives of people and haunting their mind. The puja darshan seemed to be almost impossible as the mass gathering is prohibited. But even corona didn’t stop devotees from praying to Goddess Durga. They argued that Durga puja is about comprehensiveness, and they can't be halted from visiting the marquees. They have additionally given affirmations that all vital safeguards would be required to oversee swarms and guarantee the wellbeing of every last one.,

The Calcutta High Court directed that all Durga puja Pandals in the state should be made in a ‘no-entry zone’ and added that no one except the organizers will be allowed to enter the pandal and only those can enter whose name would be displayed outside. It was declared by Santosh Mitra and Debdaru Fatak that outsiders won’t be allowed in Kolkata. So, they came up with a plan for a virtual-pandal.

Ideas are everything. Everything begins with an idea. The startup of the virtual Durga puja pandal too was an innovation. It is for the people who couldn't get the blessing of Goddess Durga through physical presence. The startup enabled many devotees to not break the age-old tradition of Durga puja. This includes live aarti, an online visit to the pandal, videos of different pandal being uploaded.

Sajal Ghosh, who is the secretary of Santosh Mitra Square said, "Lakhs of people walk through narrow lanes to reach the puja pandal every year. This time, that cannot be allowed. People in our area will also be exposed to serious threats of COVID infection. That is why we have decided to put a blanket ban on the entry of visitors to our pandal."

Echoing him Partha Ghosh, an office-bearer of the Shivmandir Puja committee, said that restricting people was not an option as Durga puja is not merely a festival of celebration but it is mostly about togetherness. He said that the sole purpose of puja is mass celebration and it would be defeated if the entry of visitors is stopped. He adds that he would stream live puja on social media.

Another prominent puja in the city, Suruchi Sangha shared their opinion about pandal-hopping, according to them due to lack of transportation as local trains services were discontinued temporarily so there would be fewer devotees.  Swarup Biswas of Suruchi Sangha said, "For the ones who won't be able to visit our pandal, we have made arrangements so that they can experience it all on their cell phones.”

The tranquility bestowed by “tranquiil” in the time of Covid 19

Build your own destiny: Journey of Kutbuddin from being an Intern to an...