Water is life. Nobody can survive without water. In Delhi's hot and humid summers when the sun scorches down heat, thirst is an all-day companion. 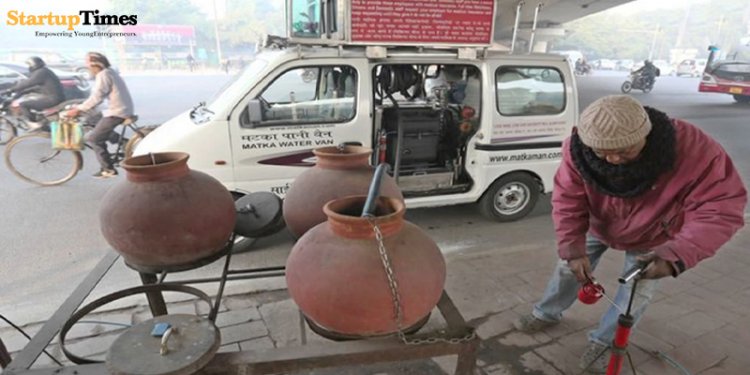 However, thanks to the 71-year-old Alagarathanam Natrajan also known as the Matka Man, those who cannot afford to buy drinking water never go thirsty.

Alagarathnam, commonly referred to as Alag, was born in Bangalore. He visited London to see his but settled there after opening a souvenir shop. Everything was getting on well but when he was diagnosed with intestinal cancer 12 years ago, things changed.

A warrior that he is, he won the battle, and now lives a cancer-free life in Delhi.

Until now, Alagarathanam has worked with a Stanford University engineer in Varanasi to enable rickshaw pullers to make their vehicles more efficient. He also volunteered at a Delhi school that takes care of homeless children and a hospice that looks after advanced and terminally ill cancer patients. He even conducted the cremation of destitutes who died at the cancer hospice and unclaimed bodies on the roadside to give them a dignified end. For this purpose, Alag had transformed his utility van into an ambulance-cum-hearse.

Natarajan says– “Why is it that people belonging to the posh colonies lack gratitude and kindness? Why don’t we show any sign of compassion to the domestic helpers and guards who work for us and are an essential part of the community?”

He adds, “Even though I live in one of the affluent colonies of South Delhi, I still find security guards on duty all day long without their employer giving them access to drinking water and the worst thing is that they have to sneak out during their work hours to look for a glass of water.”

Alag Natrajan’s story began in the summer of 2014 when he witnessed the scarcity of drinking water and the plight of people suffering due to thirst. Alag wondered how he could improve the situation, and the idea of Matka Man was born. He started out by putting a water-cooler outside his building.

The water-cooler was a success, but it did not have the huge impact that Alag desired. Moreover, setting up more water-coolers proved to be an expensive and challenging case. A friend suggested an easier solution of using earthenware pots, or matkas, which are not very costly, keep the water cool and require very little maintenance. He purchased three large matkas and installed them on Outer Ring Road, next to Panchsheel Park, where he lives. The matkas were instant hits. Presently, he places matkas in groups of three at nearly 20 locations in and around his neighborhood in South Delhi.

What does he do?

The Matka Man has completely metamorphosed his van into a mini fire engine with all kinds of decorative apparatus welded on the outside. Inside, there is an engine to pump water, two water tanks, a pulley hose reel, a welding machine and other needful paraphernalia.

He starts his day at four in the morning when he heads to an elementary school that has given him permission to draw underground water, and the rest he brings from his home in his van. He then drives around filling up all the empty pots. There are signboards near the matka stands with his contact details so he can be informed whenever the matkas run dry. Natarajan ensures that the pots are cleaned regularly and the quality of water is maintained.

Apart from this, he regularly distributes about 40-50 kg of seasonal fruits and vegetables to construction workers and labourers whenever he's out refilling the pots. He serves nearly 150 people at over 5-6 construction sites.

Not only this, he along with his friend makes masala omelettes for people going to work. He offers this free of cost to children and women, while for others, he sells it at a very reasonable rate.

Alag has also installed cycle pumps at some matka stands for people to use. Often, he hands out glow-in-the-dark stickers for safety purposes and spare nozzles for wheels.

While working incessantly for society, he has come to believe that “we are all crucially linked together but that society today has abandoned this interconnectedness. Through my selfless initiative, I believe I can start a quiet revolution of human kindness.”

AMIT DIWAN- a quintessential in the world of programming