Harshal Dilwali: Started as a teenager, today he is the owner of Clarissa Resorts.

Harshal Dilwali is the Co-founder & CEO of Clarissa Resorts Private Limited. He previously worked as Digital Marketing Intern at AsiaTech Inc. He completed his studies at IIMBx | Indian Institute of Management Bangalore. 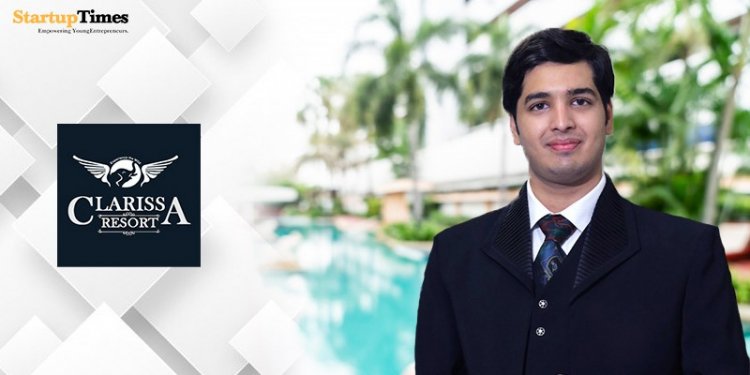 Mr. Harshal Dilwali is the Director and Chief Executive Officer of Clarissa Resorts Private Limited, Clarissa Residency. He became the youngest Director in Uttarakhand in 2017.

Harshal was born in New Delhi and brought up in Noida. He has done his schooling from APJ school Noida, sector 16. He is a top-ranked BSc graduate in Hospitality and Hotel Administration (IHM). He is MBA "Gold Medalist" from IILM with specialization in Marketing & Entrepreneurship from IIM, Bengaluru. He also specialized in Entrepreneurship & Digital Marketing from Lapland University, Finland where he received Excellence Award for Outstanding Performance.

He shared, "During his initial life, he was trolled and bullied. After being in such a situation, it was a little tough for him to adjust in that environment. Things went like that for quite a period of time but he moved on bravely and with an aim with the time."

He tries and completes everything with perfection and excellence that is definitely visible in his work.

Talking about the idea Mr. Harshal says, "The idea of getting into hospitality business was executed by family. In 2010, we developed our company but it took around 4 years to build the first resort” in Jim Corbett National Park with the Clarissa Resort.

In 2017, Harshal became the director and the CEO of the company. Mr. Harshal Dilwali feels passionately about guest and employee experience, and is actively involved in reengineering and restructuring of systems and processes of the company, thereby, ensuring an exceptional experience for all. He strongly believes that core values and culture of the company are the most important pillars that help to propel any organization’s success.

Harshal shares, "I had a different kind of fascination and passion towards this business. This passion keeps me enthusiastic to work throughout the day."

Mr. Harshal never dreamt of becoming a hotelier, in fact was preparing for engineering during his school time. And initially it was a bit tough decision for him to choose hotel management over engineering. He initially faced lot of criticism from the society and friends. But his aim and focus was very clear. He was very firm and determined that he wanted to do this because he knew that if he wanted to run his hospitality business he need to have complete knowledge and education regarding it. Though the subjects, environment, everything was totally different which he has never experienced before. According to Mr. Harshal, there was a lot explore in that industry that is why he never felt like dropping it, once he decided to continue. He perused it with more passionately. He strived for excellence and completed his degree with a rank.

Later when he joined MBA it was totally different from what he did previously. Initially he thought he would never be able to complete it. But because of his hard work, dedication and never give up attitude he completed with a Gold Medal. He said “ MBA transformed his dreams into reality”. MBA taught him a lot about how to become an entrepreneur and a how successful .

He say learning should never end throughout your life, and should never be afraid of failure, because failures always teaches you and if you won’t fail feel the joy of how to run a successful business.

What he learnt over these years he could deliver this to his business and helped in the growth of his firm.

He had a clear Vision in his mind that

He wants his company “To be the most admired and responsible chain of hotels and resorts, showcasing the Indian Traditional values with international standards”.

To achieve his vision he has a Mission

Harshal says, "We are committed to meet and exceed the expectations of our guests by providing them the highest level of quality service, safety and security. We commit to provide our corporate and leisure traveler a consistent warm & friendly guest experience & fond memories”.

Mr. Harshal says that it has been almost 7 years to this business and it is still growing. It is not only the hard work of his or his family but it is the hard work entire team of Clarissa, which has contributed, and level and every ones hard work pays off.

Harshal has seen many ups and downs in his journey. From being a mediocre student to getting bullied; from graduation to his MBA; Harshal has seen a lot. But, one thing that he realized after his graduation was that if anyone in the world is doing that thing then I can also do it. And, this was a turning point. Harshal never looked back. This thought still keeps him motivated and gives him confident to at least explore new things.

Harshal says, "The biggest motivation for me is my parents. They have always supported me and their love is something that keeps me motivated in my tough times."

He also gets motivated by reading books and autobiographies of different people. He also said that he read a book called “21 secrets of self-made millionaire” during lockdown, which motivated him and changed his life and thinking.

During pandemic, he was featured with News 18 News Channel twice as he launched 1st electronic Web Check-in website and became the first company in Uttarakhand to completely transform into 100% electronic. He included web check in facility for the guest, digital menu and digital menu. It was a brilliant move and tough to execute it in a remote area like Jim Corbett National Park Uttarakhand. Initially he was criticized that his idea will be unsuccessful. But his determination and focus payed off.

The Directors leads a young and committed team winning Excellence Awards for Clarissa Resorts for two consecutive years – 2018 and 2019. Under his leadership the company won the "Traveller's Choice Award" by tripadvisor 2020. In 2020. He has been an exceptional leader and youth icon for young generation,

Nowadays, people give up very easily and go into depression.

Harshal says, " giving up should never be an option. The word impossible should never exit in your dictionary. Always follow your heart and work hard towards achieving your dreams.

He says that one should always dream big in life. One should develop a clear sense of direction in his life, commit to excellence, work longer and harder towards ones goals, dedicate to lifelong learning, be honest to oneself, unlock your inborn creativity, get around the right people, respecting others, be decisive and action oriented and most important never allow failure to be an option.

He possesses down to earth personality and follows a simple lifestyle and He believes that the real reason behind his success is his hard work, passion and dedication towards his work.

Ola restarts electric scooter sale, booking on the app only

The world's fastest production car is now at 508 kmph