‘The true businessman is a doer, not a dreamer' The business world might appear buttoned-down from the outside - but in reality, it's a lot more interesting and intriguing than you believe. There are many stories that surround us, some told, some silently understood. 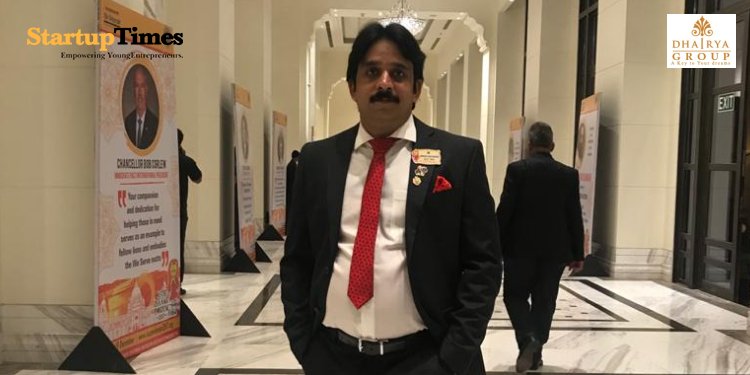 In the current scenario, the only stable thing is cut-throat competition. With a world population of 7.6 billion, everyone is competing to achieve success. If you don’t think out of the box and try new techniques in business, most probably there are lesser chances of being successful and highly fulfilled! Here is the story of a  magnetic personality who remained determined against all odds. He made his own path, chose his own road and embarked on a journey of success, a true blend of hard work and a lil bit of  passion. He never chooses to give up even after multiple failures, in fact with every failure he came up with, even more, stronger, though and well-prepared approach with his strong determination and consistent hard work, he is now one of the leading real estate developers of Varanasi. Starting from scratch he built the entire empire.

Founder of Dhairya Group of Companies, Mr. Mohan Chaturvedi, CMD  hasn’t got this name and success in a fluke. Success is appreciated and famed by everyone but the struggle behind is untold and misunderstood among the people. His story is an inspiration for many young people who are stepping into the totally new world of business and risk. Hailing from a middle-class background, he had encountered many obstacles since his early childhood phase. He always had dreams of doing something great even after facing a huge loss of capital and multiple failures, nothing was worth stopping him from believing in himself and his goals. After he completed his studies, his father advised the young Mohan that he should go for a stable job and get settled in life, but the zeal inside him was to dream big and his inner voice urged him to go behind his passion. He always dreamt of entering the business world. Luckily, his father agreed to allow him to take a chance and chase his dreams. One casual day, he met his father’s friend who has a grip over the well-settled business of Banarasi sarees, he eagerly asked him for guidance, the businessman nodded, and soon this boy gave no second thought to it and within a fraction of a second, started working without any monetary benefits. In 1999, with an initial investment of 10K, he inaugurated a retail shop but it was not successful. He tried multiple times but nothing worked. His success story started in 2005 when he finally launched a retail pharmacy shop and gradually stepped into wholesale trading of medicines and herbal products. Time passed, he set up a factory at Panchkula and took his business to greater heights, and entered into import-export of medical products. Presently, he operates two Pharmaceutical companies operating in Herbal and Organic Products - Nucora and Oreo Healthcare. He always experimented with different domains in his business. Soon, he made himself enter in real estate in 2010 and today he is well-known as a renowned name not only in the city but in the entire state. His company Dhairya Infratech has executed highly appreciated projects in Uttar Pradesh. Shivshakti Paradise, Hanumat Kripa, Dhairya Nikunj, Dhairya Awadh, Dhairya Enclave, Dhairya Heaven Duplex are some of them.

The vision behind Dhairya Group of Companies was to work hard and give their best while offering to the customers, the reason being customers are the ones making the business successful. From Real Estate, Pharmacy, Hospitality, Herbal Medicines, E-Commerce, Import and Export, his company deals in almost all areas that you can think of in seconds. The toughest and challenging obstacle for him was managing the company's survival with restricted resources. He has faith in the concept that “If you know what you want, you can find the way to achieve it.” This was his mantra of achieving success.

“Family is the compass that guides us”. The beam of motivation for Ambuj is his supporting wife and family who always encourage him no matter how worse the scenario is. His wife never lost hope and always inspired him to go ahead with the same enthusiasm and give his best  in his business and his life. Life was like a roller coaster ride for him but at the end of the day, what matters the most is the cherishing smile and happiness on the faces of his beloved family and your loved ones. He believes that money is a materialistic thing, it is not eternal in nature but the love and support you earn is the actual achievement of life whether you believe it or not. He is inclined towards the social aspect of society and tries his best effort to impact as many lives as possible through his contribution and his work. He always says, "If God has given me enough to help others, I am nobody to stop myself from doing so, I must do it."

In a statement, Ambuj said that giving birth to a new venture may not be a tough task but to face problems every day as tough challenges, struggling the circumstances that promote giving up and still you decide to encounter that and overcome it is what defines true achievement and your true mentality.

He believes failure is not the alternative to success but it is the prefix of success. Everybody encounters failure at one point or another, how you administrate the situation is what makes the difference and takes you to the extra mile.

The second batch of diplomats and officials evacuated successfully from...

From wedding bells to the bill: Hyderabad based startup aims to fix it...