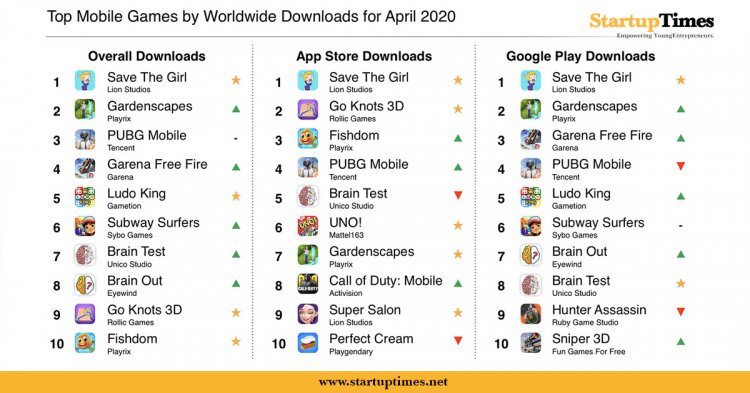 During this period of lockdown, people have started downloading mobile games to pass their time. In the first nine months of 2020, India has been ranked number one in global mobile game downloads. Indian has installed 7.3 Bn games, nearly 17% of all worldwide downloads, app intelligence firm Sensor Tower disclosed.

Until the end of March, it was around 1.8 Bn games. In the subsequent quarter, installs rose 50% because the country went into a lockdown and within the September ending quarter, game downloads grew 7% to 2.9 Bn downloads as the gaming craze continued. The US came second position in terms of installs with nearly 10% of the entire downloads, followed by Brazil at 8%.

According to the info intelligence platform Sensor Tower, Subway Surfers from Sybo Games was the second most installed mobile game worldwide last month with 19.8 million installs. The countries with the largest number of Subway Surfers installs were India at 27.3% followed by Brazil at 8%. Garena Free Fire, Hunter Assassin, Garedenscapes, Brain Out, Ludo King etc were within the list too. Meanwhile, PUBG Mobile, which has been banned from India, but it has declared its return in India with new features and investments worth $100 Mn.

In October, India had the very best number of installs, representing 15% of the entire downloads, followed by the US at nearly 12%, Sensor Tower said. Google Play downloads grew quite 40% within the first nine months compared with last year, while Apple’s App Store installs rose 16% compared to the previous year.

Over the next few years, the pandemic is likely to increase the number of downloads through to 2024 above pre-Covid-19 forecasts. Sensor tower has earlier projected that new app installs in 2024 will reach 44.5 Bn on the App Store and 139.2 Bn on Google Play.

Juhi Singh- a name which is creating history in home utility commodities....