Every day since March 2020, the neighbourhood of Charni Road, Mumbai has found itself drenched in the aroma of mouth-watering Gujarati delicacies. This aroma travels far and wide across different corners of the city through a plethora of orders that it receives on food delivery platforms including Swiggy and Zomato. 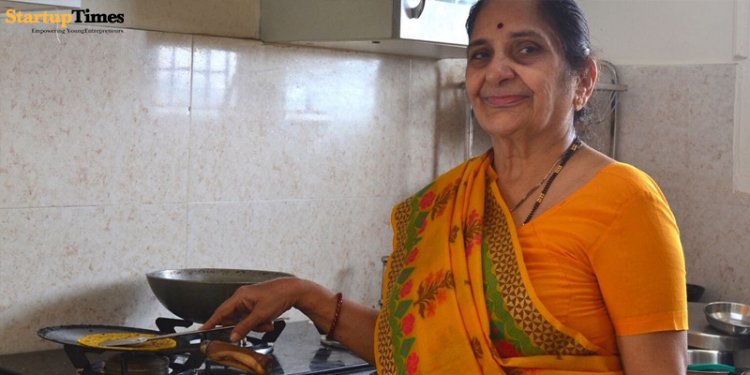 The tenacious senior-citizen started her endeavour at the age of 77, to bury life full of misfortune, pain, and struggle. Her daughter passed away when she was two-and-a-half years old, after accidentally falling from a building. Years later, she also lost her two sons- one succumbed to brain tumour and the other due to a heart disease. Urmila stood like a pillar in these testing times and motivated her family members to not lose hope.  All she had then was her grandson Harsh.

To add to their misery, Harsh met with an accident in 2019 in which he lost his upper lip and left him scarred. After undergoing surgery, Harsh faced an identity crisis. He refused to step out of the house. The man who had the responsibility of financially sustaining his family fell into depression. Everything came to a sudden halt. In 2020, his business started facing losses due to the COVID-19 pandemic. By February 2020, he had to shut his business down.

Once again Urmila became the family’s strength. “I told him that he had only lost his upper lip and business, but I’d lost three children, and was still standing strong. I assured him I’d offer all my support,” Urmila says. Every tragedy in this 77-year-old’s life made her stronger and motivated her to do more for her family.

The journey of the idea

The idea struck Harsh in March 2020, one day when his grandmother was preparing pickles. Urmila makes Gujarati pickles with great fervor. He asked her if she was willing to prepare it in bulk, and suggested that they can advertise it on social media platforms to check the response of potential customers. The spunky daadi thought it was a great idea. Harsh took a picture of the pickle made by his grandmother and posted it on social media. The pickles were an instant hit!

Within two months, when demand started increasing, they also increased the range of Gujarati snacks. Harsh said, “My friends and close acquaintances had always liked the food my grandmother made. But I never realised that so many people would go crazy over it. We sold 500 kilos of pickles and started adding more snacks.” Gradually, Urmila and Harsh started “Gujju Ben Na Nasta”, to slowly get back on their feet.

As the business began to thrive, they ended up converting the partner shop next to their house and setting it up to sell their products.

Urmila was in charge of the kitchen and rolled out dishes, while Harsh’s mother and other friends helped in packaging and managing orders. Her staff includes two helpers in the kitchen and two men for delivery purposes. Harsh takes care of the accounts and other aspects of the business. Both the daughters-in-law of Urmila also contribute in their work.

Urmila works 14 hours a day. She starts her kitchen at 7am and leaves by 9pm after all the orders are completed. Each of the orders is prepared and checked for quality by her.

Is the business profitable?

The business today earns them a revenue of ₹3 lakh a month. Harsh explains that out of the ₹3 lakh they earn, a huge part goes into rents, salaries and commission to food delivery platforms. “What remains is ₹90,000, which is spent on buying raw material and sustaining the family. There are fewer profits. Only increasing orders will boost it,” he says, adding that he wishes to open outlets at airports across India for vegetarian travellers.

Speaking on this matter, Urmila said, ““I have no idea how much the business earns. My job is to cook fresh and quality food for the customers. Cooking is my passion, and I do not feel tired even after spending more than 12 hours in the kitchen.”

“Now she is making a career for me, none of this is for her. She is helping me set up a future. She has never asked me how much money we make from this business or how we spend the money. There are only two things that she cares about- one, whether we make enough to smoothly run the house, and second, that people should enjoy the food she cooks. People liking her food is her trophy,” says Harsh.

Event Highlights – Next Startup Event (Catch us every month)