A startup in the EV market founded in 2020 by by Rajib Gangopadhyay, Kunal Gupta, Aditya Oza, and Sumedh Battewar, is riding to success with its idea to bring premium quality Made in India electric cycles. 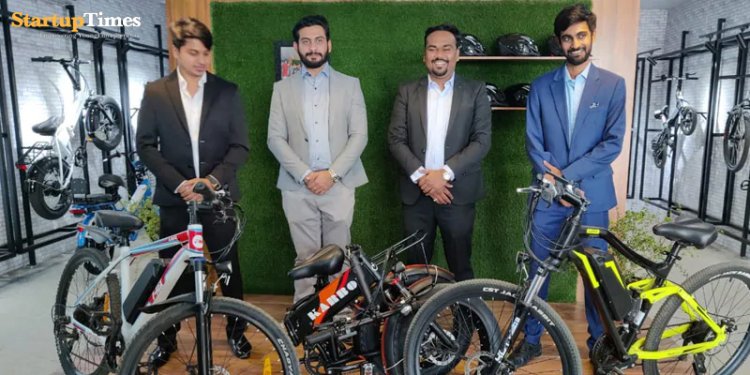 The Pune-based e-cycle startup, EMotorad (EM) is providing electric cycles at affordable prices, which currently cost way higher in the Indian market, to encourage an economical and sustainable form of travelling.

The idea behind this venture rooted when Kunal and Aditya were in college. They helped college students solve their commute problems as cab services were costly back then. Rajib and Kunal worked together at a rental mobility startup. It was in 2016-17, when they came together and came up with the realization that electric mobility is the future. “The fundamental idea behind developing these electric cycles at affordable prices was so that a common man may get access to such e-bikes with standardized specifications,” says Rajib Gangopadhyay.

In August 2020, EMotorad launched its first flagship product called EMX which is India’s first dual-suspension e-bike. It can travel a distance of 45 km on a single charge and has the ability to attain a maximum speed of 28 kmph. It is priced at ₹ 50,000.

The second flagship product, priced at ₹ 45,000 was launched in January 2021, named TRex. It has been designed in such a way that makes it easy to ride on India’s rough terrains.

The third product which is supposed to be launched this month is a fat-tyre foldable e-cycle, named Doodle, priced at ₹ 76,000.

EMotorad is expanding its reach to UAE with the introduction of two new products-Trible, a tri-fold e-bike, and Ener-G, a mini scooter for delivery, this year in the month of September.

It is also developing an app that will show the statistics on the customer’s smart phone. The tracking and security app will have an odometer reading, trip meter, battery status, calories burnt, and so on.

Aditya Oza tells, “We have invested ₹ 20 crore in the entire business till now. The business as a whole is profitable.” He adds, “We were extremely anxious about the COVID scenario and the sale of our first set of bikes was a blissful surprise as we ended up selling 1,200+ bikes in the first 40 days of launch.”

Kunal Gupta says, “Our revenue in the Indian B2C market will be exceeding $1 million in less than six months. In the international B2B market, we are targeting $25 million revenue by the end of the last quarter this year, having $6 million purchase orders already in place.”

EMotorad is up and about to expand its presence in the UAE this year, around July.

Presently, it has B2B customers in India and abroad, supplying white-labelled products to Europe, the Middle East, and American markets. Furthermore, it is also exploring the B2C opportunities, targeting countries like Vietnam, Indonesia and Thailand in the African subcontinent and South-east Asia.

The company says its main focus remains to strengthen the EV ecosystem in India and make a name for India as a prominent contributor across the world in the EV sector.

Manan Verma a 20-year-old entrepreneur and author of multiple books from...

With Wylo, you can share your experience and connect with people sharing...